Mark Daniels Jr. of Tuskegee, Ala., takes the lead on the second day of the Berkley Bassmaster Elite at Lake Oahe presented by Abu Garcia, with a two-day total weight of 39 pounds.

PIERRE, S.D. — Alabama’s Mark Daniels Jr., who was sitting in second place after the opening round Friday, vaulted to the lead on the strength of a monster 20-pound, 4-ounce limit today in the Berkley Bassmaster Elite at Lake Oahe presented by Abu Garcia.

However, before Daniels and the rest of the 107-angler field were able to make a single cast, they had to patiently wait through a 1 1/2- hour wind delay. A brutal storm passed through Pierre last night, pushing 70-mph winds and several inches of rain across the region, turning the 370,000-acre fishery into an angry ocean.

But once the water settled and the anglers were set free, Daniels started off the second round of competition just like he ended Day 1.

“Smallmouth are random. I fish randomly. Sometimes we just intersect,” explained Daniels, whose 20-4 worth of smallmouth gave him a two-day total of 39 pounds to take the event lead.

“I’m fishing transition areas where these big females are leaving spawning flats and chilling out before going deep,” the Alabama pro said. “I’m seeing a lot of the fish I’m catching on my Garmin Panoptix unit, doing the ‘video game deal.’ It’s how I like to fish.”

Daniels believes his fishing spots are replenishing daily with more big smallmouth. “The beauty of the areas I’m fishing is that postspawners should reload the spots. If I’m right, I should be able to bring in another 20 pounds tomorrow,” he said.

North Carolina pro David Fritts proved that his impressive first-day limit of Oahe smallmouth (19-7) was no fluke by bringing in an 18-pound, 1-ounce bag for Round 2. This gives the 1993 Bassmaster Classic champion a two-day total of 37-8, good enough for second place heading into Day 3.

“I’m proud of what I caught today, because where I was fishing, the wind was brutal. I had waves crashing over the bow of my boat all morning,” Fritts related. He believes this intense wave action has cost him the lead.

“I lost a 5-pounder at the trolling motor today. I’ve almost fallen overboard setting the hook, and then I had a 4-pounder come off. It’s just tough trying to manage staying on the boat in conditions like this. If it will just settle down a little bit, I’ll be able to bring in more weight tomorrow.”

South Carolina’s Casey Ashley, a self-labeled smallmouth hater, rolled across the weigh-in stage with the day’s heaviest limit of smallmouth, pushing the scales to 20 pounds, 6 ounces, putting him in third place with a two-day total of 37-6.

“I like to throw at stuff,” Ashley said, “and with smallmouth you are just as likely to catch one throwing over your shoulder as you are throwing in front of the boat. Once I figured out that I had to thoroughly fish an area instead of ‘fishing stuff,’ I started liking smallmouth a little more.”

Ashley likely will begin a love affair with the brown fish after this tournament, based on how quickly he landed his limit. “I caught all those fish in 15 minutes this morning and just kinda protected the area the rest of the day. There could be a much bigger limit there if I bear down.”

Fred Roumbanis took over the Phoenix Boats Big Bass battle with a 5-pound, 6-ounce smallmouth. It was the only fish the Arkansas pro brought to the scales.

“That sucker was so big, it took me all day to land it,” he quipped about coming in four fish shy of a limit. “But seriously, I saw that bass on my new Garmin Panoptix Livescope, cast to it and watched it eat. It was awesome.” If the fish ends up being the biggest of the event, Roumbanis will earn a $1,500 bonus.

The field was cut to the Top 50 anglers for the semifinal round Sunday. Daily takeoffs occur each competition day at 6 a.m. CT from the Spring Creek Resort & Marina, and weigh-ins are held at Steamboat Park in Pierre at 3:45 p.m.

The Bassmaster Elite Series Outdoors Expo is being held in conjunction with the tournament. The Expo will take place at Steamboat Park on Sunday beginning at noon. It features boat demo rides, an aquarium, free prizes and the latest fishing products on the market. All activities are free and open to the public. For more information, visit Bassmaster.com. 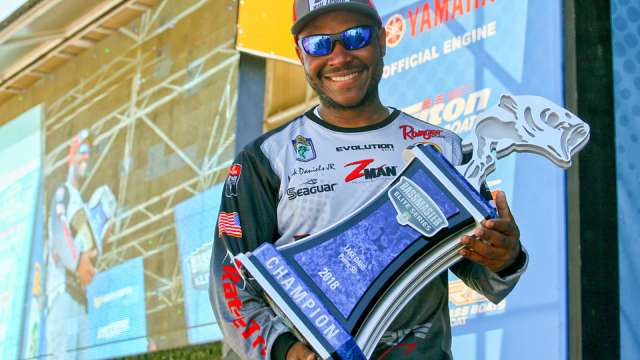